Teething Late? Blame It on Your Family’s Genes

Teething Late? Blame It on Your Family’s Genes 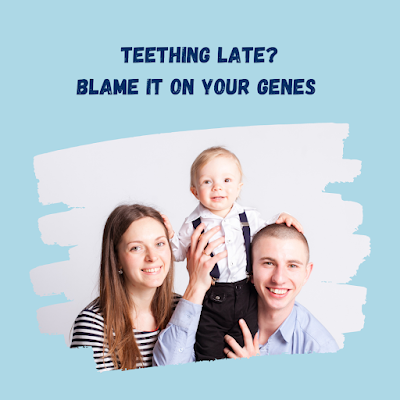 Most children begin developing teeth between six and nine months of age, but in some children, the emergence of teeth occurs later—sometimes much later. While in some cases, late emergence simply can be a matter of genetics, in other cases delayed dentition can be a sign of other, more serious underlying factors that warrant the attention of a dental specialist. Conditions like Down syndrome and thyroid disease are related to late tooth development and can be identified soon after birth or even while the baby is still in the uterus. Other conditions can be more difficult to spot.

In most cases, late dentition indicates nothing more than a genetic predisposition; however, delayed teething can cause other effects in your developing child. For instance, when teeth are delayed, speech may also be delayed or certain speech problems may be present. They can also delay consumption of solid table foods, which in turn may cause nutritional deficits in your child.

One of the most important roles of baby teeth is to act as guides for the adult teeth that will emerge later. When eruption of baby teeth is delayed, adult teeth may also emerge late, or may be crooked or crowded. In fact, a recent study conducted by researchers in Europe indicates that children with late tooth development are 35% more likely to require orthodontic treatment when they get older. The study also confirmed that late teethers have specific genetic variants that cause the delays. The same variants are related to the growth and development of the heart, skull, jaws, ears, fingers and toes.

In general, if your child has not had any signs of teething by the age of 10 or 11 months and especially if you suspect other signs of developmental delay, it’s worth contacting your pediatrician or KiDDS Dental to determine the underlying cause. We will ask about late tooth development in other family members and will also discuss signs of other types of developmental delays for you to watch for.